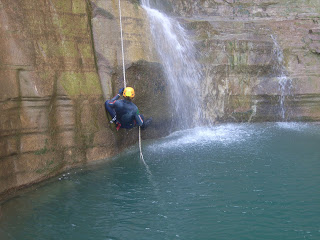 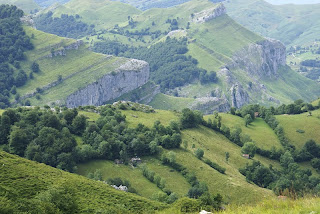 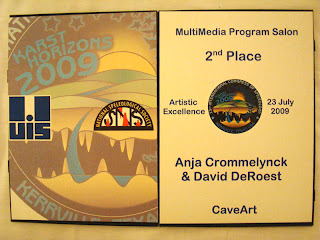 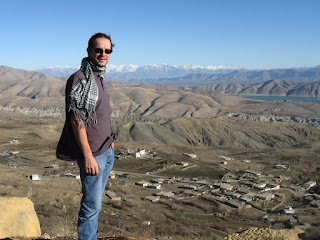 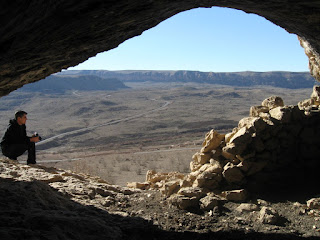 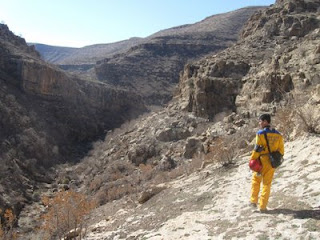 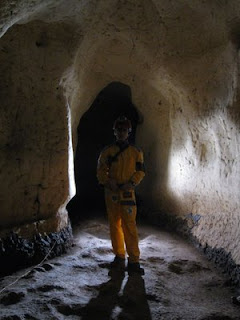 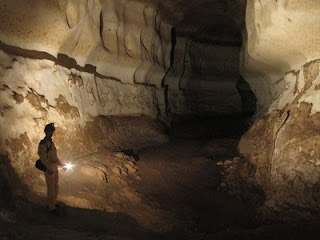 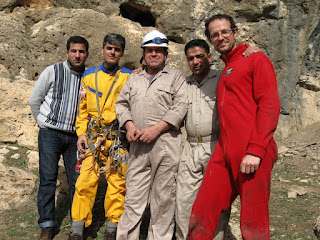 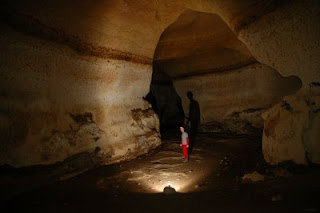 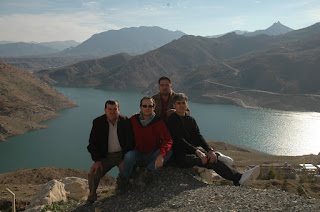 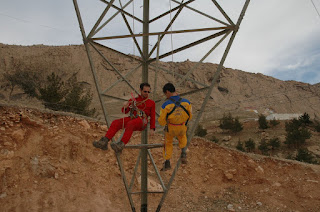 After the Lilburn trip got cancelled last weekend due to impending snow storms, Wilbur - who was leading the trip - decided he wanted to give it another try this weekend. Four of the original party of seven were still up for it: Wilbur, Marek, Will & me, the others having to cancel for several reasons.

Friday, early afternoon, Will & I took the train to Palo Alto where Will & Marek picked us up and off we went on Highway 85 driving through remarkably green undulating landscapes and onto Highway 152 through the San Joaquin Valley, passing the San Luis Reservoir and having an early dinner in a great taqueria in Los Baños.

With a full stomach we went on to Fresno, where we had a brief stop over at Howard's house to pick up the keys to the cave and to the cabin in Kings Canyon National Park. Howard is one of the old timers of the San Joaquin Valley Grotto. Since he couldn't make it on the trip this weekend, he graciously offered to act as our Fresno HQ, monitoring our activities via radio updates.

Around 21.00 h that evening we arrived at the jeep's destination. What should have been an easy 8 km approach from the Redwood Saddle Trailhead (see map), had turned into a much longer trip (16.8 km to be precise) since some of the roads were still closed after the storms last week. 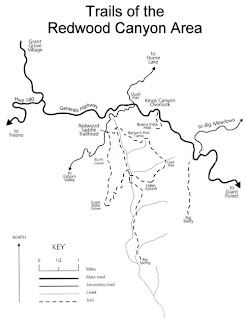 We parked at the Big Stump parking lot on Highway 180, hiked on the sometimes dangerously icy Highway 180 and Generals Highway for about 6 km, put our newly bought snowshoes on at the "Overlook" and cut down a fairly steep slope to catch up with the secondary Redwood Saddle Road below and finally reached the regular trailhead around 23.40 h.

Even with snowshoes on, our feet would often sink about 30 cm, sometimes even deeper, in the soft and deep snow. This made our progression much more difficult, especially for the person paving the way in the front, constantly scooping up snow. Every hour Marek would establish radio contact with Howard to keep HQ up to date on our progress. The to-be-remembered one-liner that came up in one of those conversations and described our trip very well was "We're not as near Chinquapin as we thought ... This is going to be an all-night epic!". And right he was ... 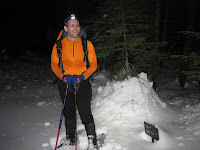 Although progress was slow and difficult and we didn't have the time to enjoy it properly at the time, we walked through an amazingly beautiful landscape: a forest with giant Redwood trees, virgin snow glistening in the lights of our caving helmets, the occasional animals footprints and no sounds whatsoever, not even of the bears who were probably sleeping it up in their dens thickly covered with snow.

At 4.00 h on Saturday morning we arrived in the cabin and - luckily for us - we didn't have to dig out the entrance! Wilbur started the old-fashioned cast iron stove, while Marek got a fire going. Warmed and revived a little, we fetched water, installed the emergency exit ladders, Wilbur dug out the bear (-proof) box, we ate something, had a hot chocolate (thanks for that Wilbur!) and went to bed around 6.00 h.

The next morning (hmm, or rather the same noon) - all being somewhat stiff and tired due to our "epic" walk (and despite the vitamin I for some), we decided to take it easy on the caving and do a course-familiarizing through trip for us newcomers, to be followed by some surveying and checking out leads near the exit. Wilbur spent 45 minutes digging out Meyer entrance, while Will and Marek went to check out the historic Lilburn entrance.

With more than 27 km in passages, Lilburn is the longest cave in California. It is a complex three-dimensional system dissolved within beautifully banded black and white marble (yes, the cave is formed in marble and not in limestone!) and has several large streams. The cave is managed as a research area and most work in it is conducted and organised by the Cave Research Foundation.

We made it into the cave around 16.00 h and it definitely fulfilled every expectation that might have been raised by all the stories we've heard so far. It is beautiful - especially in the lower stream washed passages near the Meyer entrance where the marble is not covered with mud. And it is a lot of fun, my favourite type of cave, the scrambling up and down one!

After descending the 12 m deep entrance pit with a cable ladder, the cold draft coming from outside fell away and we could start to enjoy a relaxed trip. Marek & Wilbur first made a slight detour passing Telephone Pit to show us a dazzling white flowstone and rimstone formation called the Glacier.

The way on was through a series of narrow canyon passages formed along nearly vertical joints intermixed with the tubular passages of the East Stream. The marble looked magnificent here! We saw beautiful examples of anastomoses (intertwining networks of veins in the marble) and pendants (shape-wise looking a lot like stalactites, but instead of being deposited by water, they have been carved out of the bedrock by water) hanging down from the mother rock. 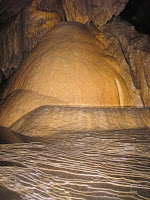 On our way to the Hex(adendron) Room (originally named for the six passages meeting there until more exploring found that there are actually nine!) we saw the Big Yellow Hungus Thing flowstone-drapery-stalactite decoration (see picture - taken by Bill Frantz) and some very nice, bright yellow rimstone cascades and bath-tub-sized pools. From the Hex room, we made a detour to go and see the Enchanted River’s resurgence, the White Rapids, passing one of John Tinsley's sediment collector sites. Then we passed “That Room” with its mountain leather hanging from the ceiling like dead leaves and continued our way down Curl Passage to the emerald pool in the Lake Room.

Climbing up nearly 30 m up to the Upper Old Cave area, we admired the 6 m tall Great White Pillar (see picture - Bill Frantz) and, passing a very unpleasant and nearly 40 m deep drop called the Crevice, went on to the 2 By 2 Complex with its twisting, branching passages sparsely decorated with white, orange and red flowstone and cave pearls.

Then it was on to the Bacon Rind Room (see picture - Bill Frantz) where we went poking around for leads. The map didn't 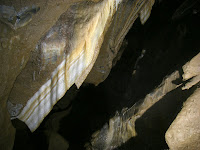 seem to make too much sense for that area so we concluded that the entire area would have to be resurveyed some other time and proceeded towards the historical entrance passing some nicely-named climbs up like the Ice Cream Cone.

We made it out of the cave by 21.00 h (the hardest part of it all being the walk back to the cabin through the deep and soft snow without snowshoes), had delicious food (fresh veggies, beans, Weiner sausages, mashed potatoes & Ramen noodles accompanied by hot chocolate), Wilbur & Marek did some maintenance in the cabin and went to bed at a decent hour. 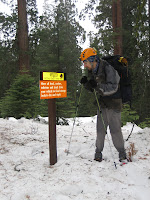 On Sunday morning everyone felt refreshed by a good night's sleep, we had breakfast, cleaned up the cabin and started heading back to the car around 11.00 h under a drizzling sky, again keeping regular contact with Howard at HQ. Although we had much more uphill stretches than on the way to the cabin, for some reason the walk seemed to go a bit smoother ... probably because we could walk back in our own footsteps (discovering en passant that we sometimes did ridiculous detours - a testimony to how snow and night time can change your perception of a landscape!) and maybe also because Howard and Janet had invited us for dinner and a hot shower in Fresno that evening and we were all looking forward to that.

Around 16.00 h we were all glad to be back on the Generals Highway, happy to take our snowshoes off and relieved that it had only started to rain more heavily for the very last part of our journey. After another 3.5 km, Marek got a lift from a friendly Hungarian family who dropped him off at Big Stump so that he could come and get us by car.

The worst part of our journey eventually turned out to be the end of it ... having to rearrange bags and be out in the cold rain after we had been in the warm car for a couple of minutes. Luckily the Visitor Center at Grant Grove had a covered porch where we could change clothes and even found heated bathrooms that were still open!

At 17.45 h we were well on our way to Howard's where we were treated to a delicious chicken & cornbread meal with loads of side dishes. Janet even made us pumpkin pie, the perfect treat after an intense weekend! 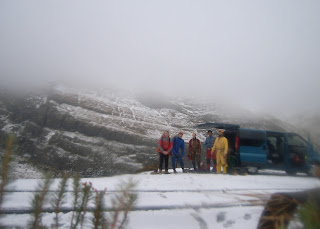