Friday, June 3rd 2011. 10:30 a.m. Simultaneous arrival at the Laide Fosse sinkhole in Hamerenne, Rochefort by Renaud and Hans' car. The weather is perfect. Should we go caving or enjoy the sunshine and the relaxing breeze? The weather really got us debating this time...but, cavers are cavers, and Laide Fosse lured us into its caverns.

After the traditional sandwich lunch, we changed into our warm caving gear and quickly descended into the secluded sinkhole in search of cool air. The cave entrance was dry, as a result of the long dry spell this spring. After searching for the correct route at the entrance of the cave (actually it was quite obvious), we found the 2.5m drop, followed by the sharp left bend and the P4 with the E8 immediately above it. I was glad Renaud offered to climb it, because an 8m climb is no simple thing, especially with a 4m pitch directly below it (that's a 12m drop if you fall at the top!). Using the only available "broche" we decided to secure Renaud for the tricky first 3m section of the climb. The remaining 5m were less difficult from a technical perspective, but of course, the security at that height was essentially non-existant. Bravo Renaud for the courageous climb! He secured the ropes for us, and while we ascended, he started rigging the 15m traversée to the right, along a deep drop. This too was carried out with skill! This is not a cave for the faint hearted! Thanks to the rigging, Bram and I followed nervously, but without too much difficultly. 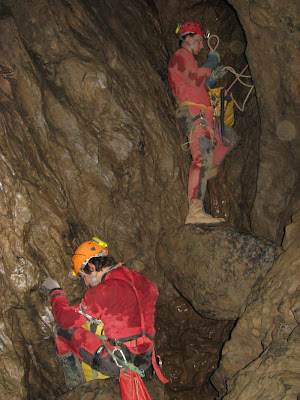 We crossed an éboulie, hit an intersection, turned left and entered a large chamber with an obvious anticline. We rambled around a little before descending into the 25m pitch along the anticline. Bram offered to rig this narrow, uncomfortable pitch. At the top there was only a single broche and in the narrow descent there was another broche available (no obvious, natural anchor points present). A little further on, a further descent was possible using a double anchor point, always along the anticline. Arriving at the bottom, we discovered a last narrow étroiture below that led to a final small chamber. In this chamber we found a pretty formation and we could also hear the river some meters below us. However, we couldn't find a way to the water and, after a photo shoot, we considered this our end point and decided to start our ascent. 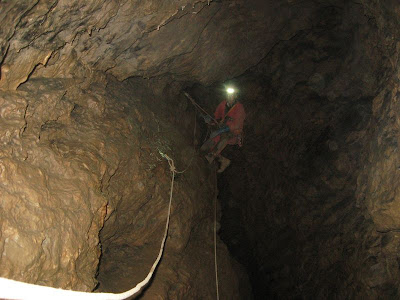 The étroiture proved much more difficult going up than going down. Bram didn't have many issues, but Renaud had a great deal of difficulty passing through the narrow passage. After some pulling from above and pushing from below (ouch, my head and shoulders!!) Renaud made it through, a little shaken. My passage could have been smoother as well. I tried on my right side first, but after a five minute attempt, I descended to retry my luck on my left side. Much better! 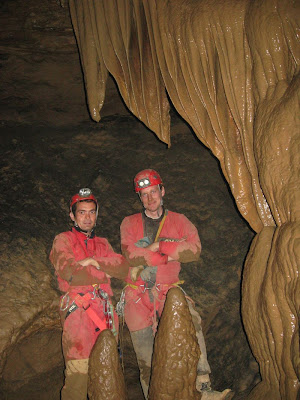 The ascent up the 25m pitch wasn't a big deal technically, but since it was rather narrow, removing the rigging (taking along the rope and the kitzak up the narrow section) was particularly hard going! I appeared at the mouth of the pitch, breathing hard and sweat running down my face.

Back at the traversée, Bram decided to remove the rigging. I therefore crossed first, for some reason much more confident than the earlier crossing, followed by Renaud. Bram bravely removed the rigging as well as the descent at the E8, pulling through the rope at the end. Great job Bram! 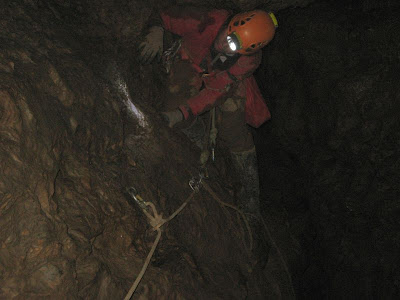 This was a caving trip that tested our limits of fear, stamina and technical knowledge! After five and a half hours we were glad to exit this (for our level of expertise) challenging cave in one piece! A toast to La Laide Fosse with Rochefort 8° and Ice Tea!
Gepost door Björn op 10:55 Geen opmerkingen: