It all started when we were deciding on which cave to explore next. Finding a suitable date was the first hurdle, but we got this out of the way, we needed to figure out where to go. Many a cave crossed our mind, but in the end Réseau de Frênes was the main contender: Arun, Ewa and Renaud had been there before a few months earlier and were impressed by it while Bram and I had never been and were curious to find out what this cave was like. Sporty, big, traversées, metal rungs and a waterfall were apparently some of the main features, and Renaud was eager to reach the upper levels of the cave after having attempted (but alas failed) a specific climb during his last visit. 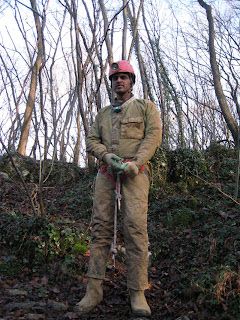 With all this as background, we (Renaud, Arun and myself - Bram, the poor sod, was ill and had to stay home) embarked on our journey through the passages of this cave on Saturday, December 17th, after having retrieved the key Chez Lucienne. Somehow, we had forgotten the map for this extensive cave. Stupid of us. It was cold at the car park and we were somewhat anxious about water levels: it had been raining and snowing profusely the past couple of days/weeks. As we 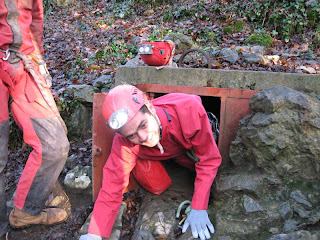 approached the entrance, a concrete box with a hinged metal door, I remembered having seen video's on Anja's Explositie. As it turns out, her exhibition took place in this particular cave, so that was pretty cool. As I crawled through the entrance, we were welcomed by a beautifully decorated butterfly trying to survive the winter cold. Poor thing.

One of the highlights of the cave became apparent immediately: the metal rungs fixed into the rock at two meters from the entrance forming a ladder into the abyss. The complexity of the cave was also immediately obvious, with various junctions and holes leading to lower caverns. Luckily the combination of Arun and Renaud's memories proved successful in terms of navigation, and we managed to find our way around with relative ease without the use of a map.

I was impressed by the size of the cave as well as the long, low-ceilinged passages between the various rooms. Just before the Galerie des deux Erics (it's easy to report about all these places with the map next to you ;-)), we hit a big issue: water filled up the passage. Renaud offered to soak his suit in order to investigate and dropped down into the water. A few meters onward he told us it was possible and easy to pass, so both Arun and I lowered ourselves 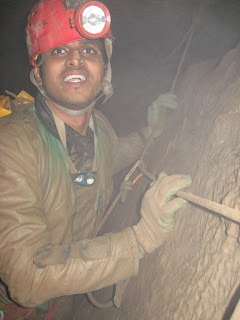 into the chilly moisture. Wet for the rest of the trip! After crossing into Salle du Murmure we found the hole in the ground and descended into the lowest level of the cave, the water in the river producing a thunderous noise. Bearing right and ascending, we worked ourselves through a meander and via a traversée we descended once again to the river. After a sharp left 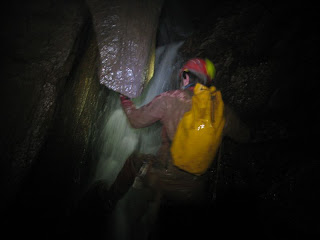 we reached the waterfall which was easily scaled. Wet again! A few meters further on we climbed up to a level higher, remaining high by means of the infamous traversées (not for the faint hearted and sufferers of vertigo). A junction was reached, taking us higher to another junction. Turning left would allow us to make a round trip to the entrance via Salle des Français, but we took a right through a number of long, narrow tunnels.

We were looking for Le Tube or Puit de l'Oppo in order to climb to Etroiture Erik so that we could explore the Réseau GSNC, Réseau des Hollandais, Réseau Dynamite and Réseau Jacques Simus. I successfully inched up a slippery and muddy E3 at the place where Renaud and Chris 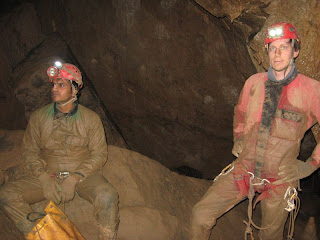 made their thwarted attempt last time and went exploring, possibly finding the etroiture we were looking for in order to continue to the Réseaus, passing by Puit de l'Oppo and ultimately descending through Le Tube. We were all too tired to continue to the upper levels. Next time better and with more of us climbing up to the next level. 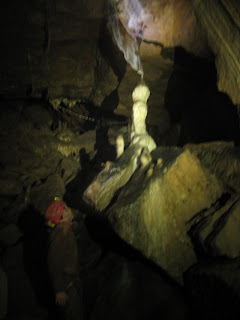 So we returned to the main junction and continued onto Salle des Français, enjoying the beautiful formations and pressing on to Salle de Cigogne, Galerie Noire and to the exit. 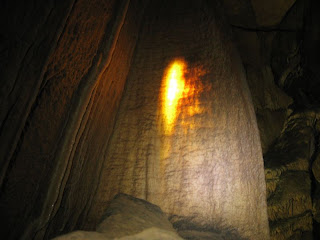 Tired but satisfied, we exited the cave. To think that we dragged along that (wet) kitzak all the way without using it!

Our final highlight was being invited into Lucienne's home when we returned the key. It is always an honour to meet cave discoverers! And her epic campfire stories added even more colour to our memorable trip! Now we surely need to go back!
Gepost door Hans M op 07:49 Geen opmerkingen:

Grotten we vaak in de States of zelfs Iran?