Wednesday 26th of November: Will and I were packing our caving and camping gear for the first time since we've arrived in the States! We were not sure what to take; other country, other habits ... Will H - who spent the night at our place that evening to make logistics easier - luckily gave us some tips. 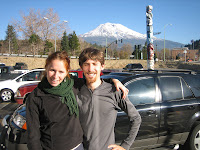 Next morning - Thanksgiving Day - we took BART to Oakland (across the San Francisco Bay) where Brad picked us up in a rental car. We set off on an ~ 8 hour journey North, almost into Oregon. On the way we got some interesting insights in rocket technology, Mormon life and California geology and had a great view of the snow topped Mount Shasta from a little town called Weed ...

Around 17 h we arrived in the RC (Research Center or was it Recreational Center?! ;-)) and met the already present cavers from as many as 4 caving clubs: SFBC, Diablo, Mother Lode and the Shasta Area Grotto! We made some food and had some delicious chicken with veggies generously shared with us by Frank, Iris and James.

At about 20 h, it was time to go out into the cold and acquaint ourselves with the lava landscape. Will H. took us to Indian Well, the cosily lighted Mushpot Cave which is a developed (as in 'made easily accessible to the public with paved floor and plaques to explain the different features') lava tube and then searching for Lava Brook and / or Thunderbolt caves. We never found them (GPS's!), but stumbled upon Sentinel Cave, one of the larger and very interesting lava tubes with at least four superimposed levels; almost like a real cave!

The next morning Bruce - our trip leader together with Pat - had a serious announcement. This Thanksgiving CRF (Cave Research Foundation) trip marked the 20th anniversary of exploration in the area. To celebrate this event, we had to make sure to keep in mind the most important goal of the day: "YOU MUST HAVE FUN!"; which meant we could do some "course familiarisation" (i.e. be a "tourist") and explore Mammoth Cave, another of the bigger lava tubes with almost 2.5 km in passages. It is probably the only muddy lava tube around here and we were promised tons of mud. It turned out not to be that bad after all thanks to a relatively dry period preceding our visit. Upon request everybody was back around 16 h at the RC to start preparing for the Thanksgiving potluck dinner, which included the traditional turkey, a roast ham and a plethora of side dishes and desserts. It was a great evening and - just like the turkey - we all got really really stuffed!

The following day Will and I took off with Shane - who is the Park Ranger responsible for the caves -, Cyndi and Brad to the Big Nasty. We had been warned thoroughly about the Big Nasty: extremely uneven terrain due to expanded and then collapsed surfaces, snakes - luckily not so much in this time of the year - and prickly bushes all over which force you to crawl on hands and knees to get through. Although somewhat intimidated Will and I decided to go through with it and it proved to be a very good and productive day. An hour and a half walk bushwhacking led by Shane's gps brought us to promising territory and we managed to topograph 16 survey points (which is a good score apparently since you have to measure every station back and forth due to the lava's interference with the natural magnetic field) and still going before we had to go home. (You don't want to be out in the Big Nasty after dark, mountain lions all over!) Back in the RC, Brian took us to the Northeastern corner of the Monument for a visit of the Petroglyphs and in the evening we had another great meal: delicious soup made with turkey stock, an exquisite Oriental Style noodle dish and Italian pasta. 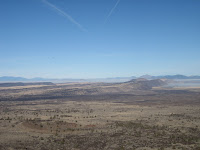 On Sunday morning, Will², Brad an I had to leave to be back in town by the evening, but not before getting to the top of Schonchin Butte. Will & Will, fighting over who would get to be addressed as Will and which one of them had to take on a pseudonym decided to have a contest ... first to the top ... The previous record set by Beej was 10.5 minutes. They managed to get it down to 8.5 minutes. I'll leave you to ask Will and Will who actually won ...

We decided to go back to San Francisco by the scenic route passing through nice landscapes and through the cute little town of Adin where we had an artisanal smoked hamburger sandwich. Further down the road we had some more fun playing around with some stones and around 20 h Brad safely dropped us off again at the Oakland BART station. Pity we couldn't stay longer in Lava Beds ... but it was a great trip to start our US caving career with and we'll be back! ;-)