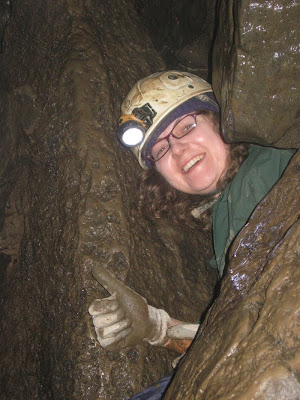 Have you ever heard something about spelunking? No…? Don’t worry, me neither. Having tried out my first cave, I can share my experiences with you.

Firstly, I am sure you are eager to know how the whole experience was? No words can describe it. It was just perfect, the best possible experience in every way and, by far the most extreme I have ever tried. You can just look at my face:] and read the description below but the feeling can be compared to seeing the top of an ice mountain, the best parts are covered and available only for these that are brave enough to try. I wasn’t brave at all. I couldn’t even sleep well the night before…but it doesn’t matter now, so let the story begin…

Everything took place on Saturday, 26.02.2011. There were five of us: Hans, Renaud, Bram, Arun and me. Our goal was to explore the Grotte du nou Moulin situated in Rochefort, which is considered to be (as I heard from boys) a beginners cave. We left after nine in the morning. While Hans was driving a car, we were all studying the map of the cave and detailed descriptions. You could feel our excitement in the air, sorry in the car:D Hans as a driver, and others as guides were well prepared because we got there around 11 am without any problems with finding our way. We parked the car next to the cave, and were able to see the river that goes into the cave when it is been raining for many days. Have a look at these two pictures, different frames but it gives you a general idea. 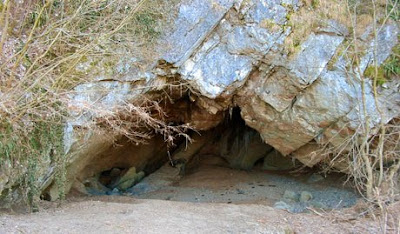 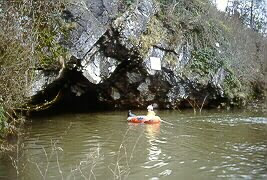 Then the procedure started, they began changing their clothes, so I started coping them. I also got advice to use the toilet before I put on everything. I put my waterproof trousers, jacket and shoes, that I found in SPIT and I was ready for the next step. Then we started with the harness, making it suitable for each others size, and replaced the batteries into our helmets. We were almost ready. The final part of our preparations was lunch. We ate some sandwiches, tomato soup, nuts, and had some drinks, we also placed some snacks and refreshments into our common rucksack. By now we had sent a message, letting everybody know that we were ready to combat the cave. 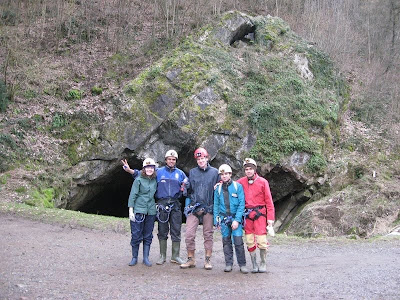 Hans, the gentlemen in red was carrying the map, Bram the men in the blue suit was carrying the rucksack at the beginning but then they alternated in doing so. Fortunately I didn’t have to wear this heavy thing:P We knew that there were two entrances into this cave, the upper one where you have to use ropes and the lower one which was our target.

Our first few steps inside the cave guided us to a metal fence which didn’t look like a gate to enter. So we went back a little bit, and we tried to look for another way. Bram tried one crater but it went nowhere so he had to crawl all the way back on his stomach with our rucksack. We went back to the very beginning, almost outside the cave to look for other paths. It’s started getting funny. After some minutes we decide to go as we first wanted to and try to pass the fence. It appeared to be possible. Afterwards we realized that this fence could have been here to protect rubbish coming inside the cave together with river. The beginning of the cave was quite easy because it was pretty wide but then it started getting narrow and low, that I had to try some crawling on my back, on my belly, with my head or feet first. Stones on the ground don’t make your life easier, and your knees after some time also feel that.

Some examples of things/activities we have to do ‘sightseeing’ the cave. 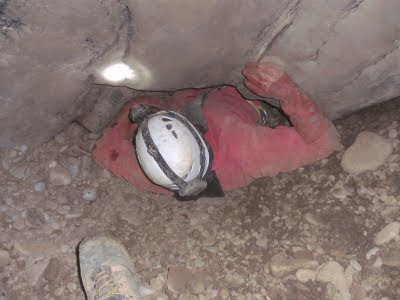 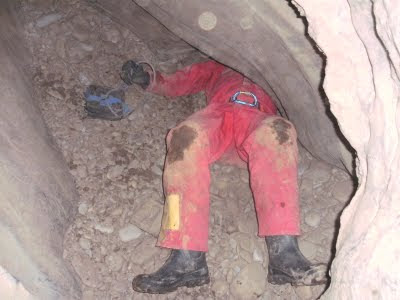 We read in the car about Fromage (NVDR "Gruyere"), the part of the cave that can make some difficulties (many people got lost there) and when we were getting closer to it I started wondering how much time are we going to spend there, if in the beginning we couldn’t even find the entrance. But surprisingly it wasn’t so bad as I thought before. We didn’t have many problems to pass it, we tried to follow some tiny rope that some cavers left before to help find the way. The fromage part was pretty interesting, it consisted plenty rocks of different shape one next to another. Sometimes you had to climb them sometimes just go below them. As you can notice caving is not only about going down as you may think at the beginning but it has where you have to go upwards. Important thing that boys repeated few times was to tried to look back as many times you can to remember the way we came. 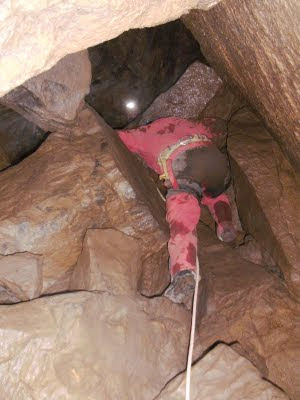 In the end of fromage, where there was a lot of space you had to climb the highest part and there you could find some interesting formations. That was our goal, but it was quite hard to reach it. We had been looking for it for a while and having done so we then decided to have a break, and eat something. But of course boys didn’t give up so fast, so they started looking again for a so-called balcony to find these sculptures. We eventually did it, having climbed very steep rocks. Awaiting us were amazing views, such as: 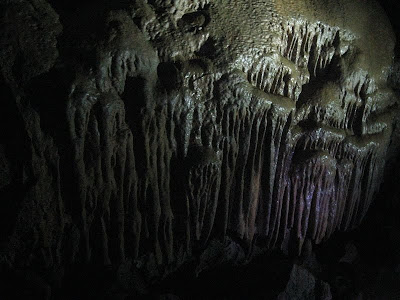 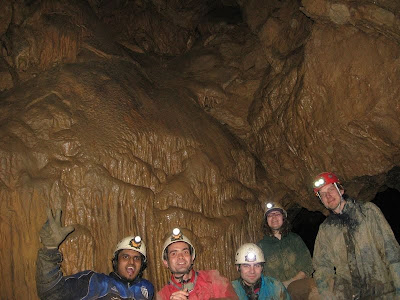 You can see happiness all over faces.

Okay, now time to go home, means go back, that was sometimes difficult, especially when you had to climb down steep rocks, and you need all your 4 limbs to protect you before decontrolling the situation. We decided not to take the same way as before, but to make a roundtrip which in case of this cave was possible to do. So again, some worse or better try-outs to find our way. We noticed that somebody marked this way with the orange spray spots so we tried to follow them, but sometimes they were really hard to find. But there was always some brave men from the following guys that was looking after our way and who allowed me to sit, rest and eatJ 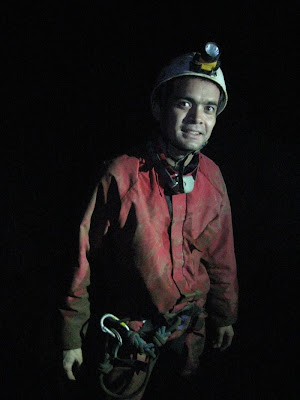 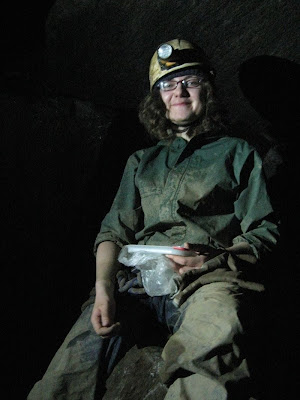 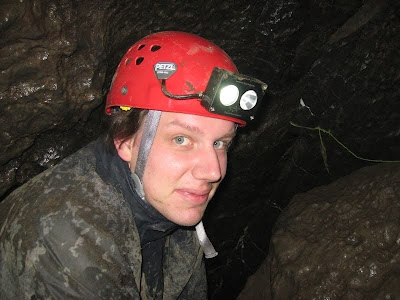 When we found a pit filled with water we knew that we’re closer and closer to the exit but we had to find again our way. So after climbing some rocks there were two ways, of course, the first checked was the wrong one:P, and then the other one was the proper one. There was a metal bucket left by some cavers to take the water from the hole we need to go over. This step was quite challenging, you need to go a little bit into the water to go into the hole below rock, and the water wasn’t very warm. Some of us got wet. But we were still continuing. Sometimes it was very narrow between the rocks that I thought my body will never fit there but after some small movements, changes of position it appeared to be possible. The scary part for me was also the long ‘chimney’ you had to slide down, controlling it for your own good. 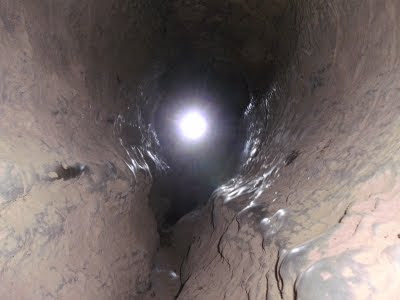 There was another way I could choose but nobody wanted go there so I ‘fasten my ass’ and I decided to try it. After this there was nothing more left. We got on the same track that we came in the very beginning, nice and easy, we followed the way, and after 4 hours being inside we appeared in the front of the grotte du nou Moulin. Rain said kind hello to us. 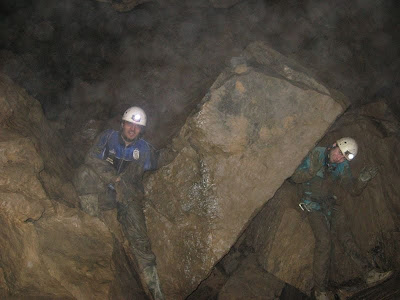 What’s now? Of course we had to wash each other after all this mud and clay. We went inside the river to get nice and clean. It took us a while cleaning all the equipment and our clothes. Then we dressed up into warm, tidy clothes. We ate the rest of the smashed food from the rucksack and all together we decided to go and try some local Rochefort beer. About 5pm we decided to go back to . The car journey was very nice mostly in rhymes of . We got in about 6.30pm.

After few days passed I can say that I really enjoyed this Saturday. A combination of unforgettable memories and a worthwhile experience. I am sure I want to continue this adventure. I never thought I could feel so comfortable amongst people I had just met twice in my life. But they all made it. Thanks to the team for being so funny, kind, caring throughout the duration of the trip.

Although this is the end of the story, I hope that it is not the end of an amazing adventure which I have only just begun.

there are actually 3 entrances ...