When it was a usual Friday evening on 29/04/2010 for most of the world, it was an exciting once-in-a-year evening for the few of us from Spekul. It's the day when the historical Fort de Barchon of Liege is open for Cavers from across the world to train on its endless aerial and underground cave-like networks.

It was still bright when 6 of us (Bram, Hans, Ewa, Jochem, Renaud and me) reached Barchon giving us enough time to prepare ourselves for the activities. When Bram and Hans made their tent on a nice 'green' ground on top of the fort, Jochem cooked some nice meal (paella and pan cake). When we were locked and loaded it was almost 10.00 pm. So we decided to do in 2 groups – Bram, Jochem and Hans took the route B while Renaud, Ewa and me decided to take the route D (Miscellaneous route). We agreed to meet again in one and half hours without knowing what's there in store for us. 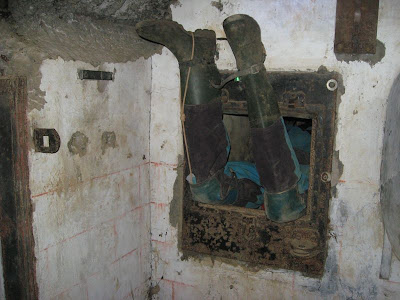 Route D was quite interesting with various challenges – A ladder climb, lot of narrow crawls, few deep and narrow pitches demanding nice rope techniques. After a while we lost track of the actual route but found some really interesting passages. On the way, a seemingly humble 'Traverse' on the ceiling of a small room made me 'sweat like a cow’:D. After traversing few more pitches and narrow passages we emerged out in the middle of a wall to find some nice 'fractions' and 'parabloes'. As they lead us outside the fort we wandered for few minutes before finding a 'ladder bridge' which would take us across the 'moat' like structure. When we approached the tents in silence assuming the other group would have already gone to sleep, we heard some noise from the 'moat' – it was the other group now joined by Bjorn! Finally when we reached it was almost 2.30 am, just 3 hrs of delay from the agreed time to meet back: D.

All of us relaxed a bit with some snacks and beer. As the other group decided to lay down enjoying their beer, we (Renaud, Ewa and me) along with Bjorn decided to go ahead and do more. As, we have already decided to leave by Saturday afternoon, it was obvious that we cannot do all the routes. So we decided to do the most demanding of all the routes B. Lead by Ewa ;), we took a narrow passage which kept going. After walking in the bent position for several minutes we reached a ladder (what a sign of relief :)). From there we have to walk to a tower outside the fort which was 20-25 meters with lot of traverse and parabloes around it (at the top) pinnacling with 50 meters long rope to down to the ground. By now tiredness was evident with each of us. While Ewa took the stairs, Bjorn took a shortcut to the top circumventing few ropes. Undaunted, Renaud took the rope and I followed him. But few minutes later I retracted back with a muscular cramp in the leg. But finally every one of us was on the top ready to do the 50m rope to the ground. Bjorn led us followed by Ewa, me and Renaud. It was quite thrilling at the start (for the first few meters) but after a while it was annoying as you have to pull yourself hard to reach the ground. Finally by 5.30 in the morning we decided to call it the day. Renaud and Bjorn deciding to sleep in the car, Ewa and me returned to the tent. We went to sleep with the early birds chirping and the dark sky turning orange. My tiredness took a toll on all, as I left a zip open in both the tents (unknowingly, of course). It was my cell phone alarm which woke us up I guess. It took us some time to crawl out of our tents. But by the time we were out breakfast was awaiting us thanks to Renaud, some nice croissants from Carefour. As Hans and Jochem decided to leave for home, five of us decided to do the route D which we missed yesterday. After taking the same route we arrived at the well from where we missed the route. This time we could see a marking that lead us to a watery slump with a steel cable. After, crossing that and one more pitch we arrived at a narrow network of 'twisted' plastic pipes. With Renaud taking the lead and Ewa following they made it with some ease. Next comes our ‘100-kg man’, Bjorn who tried his best but could not bend his knees through a too narrow turn. Standing at the bottom all I could hear were some crazy noises of him ramming against the walls of the pipes. After fighting for a while he has to come down leaving the way for us (and a group that was following us). Finally, we were glad to see the sun. We went straight to our tents looking for water. As we were running low on our supply in the tents, we had to head to the water pipe at the toilet which unfortunately read 'Non-Potable'. driven by the monstrous thirst we ignored the sign and filled all the cans. Then we lay down under sun for several minutes near the tent hoping Bjorn would return there. After a while Renaud went down to have sausages at the bar found him enjoying a beer :D. 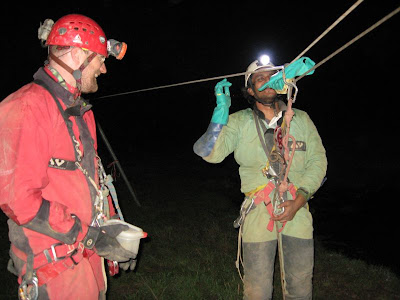 As everyone was tired and the weather was perfect we decided to lie down for a while and do the aquatic route before leaving home. In the meantime Bram, Ewa and me where trying our hands at a line connecting the tower on one side of the moat to the other side whereas Bjorn managed to get us some spare neoprene to enter the ice cold water. By 1.30 we were finally ready to do the final part of the trip – the aquatic route. In the orange suit I was quite eye-catching I must admit :D. When we reached a pipe half-filled with water we were almost sure that it's the way. So Renaud taking the lead and Bram following him started the adventure. By the time they reached the end of the pipe, a nice gentleman (passer-by) pointed out that it's the end of the route and the start is few meters away. Drenched in the ice-cold water Renaud and Bram have to get out of an emergency window to reach there. Later we noticed that the entrance was also a pipe but was too steep that it might be impossible to climb it if we could have continued the tout in the wrong direction. This route was also narrow as every other but deliberately half-filled with water (with the help of artificial walls) to keep up the name. After a narrow passage we reached a room with a narrow passage which might be 30 cms high, 50-60 cms wide and 8-10 m long filled 2/3 with water. Again undaunted Renaud took the lead while Ewa (by chanting some curse words :D)and Bram followed. As we could see a clear shortcut Bjorn and me (who was scared to death :D) took that way. Then comes a supposedly once-a-septic- tank below a toilet like structure. It was again 10m long but with more width and breathing space. With Bjorn holding me I managed to float across the tank (thanks to my orange suit!). Then a couple of narrow passages with water flowing through it, we almost reached the end of the route. But then comes the last but not the least challenge – narrow entrance completely filled with water. We were left with no choice but to take a dip. Uh, finally we reached out through the pipe which we first mistook for the entrance. Emerging successful with completely drenched suits we walked through the street (or the moat) inside the fort with people on both sides cheering and congratulating us! (a rare or an impossible event when you emerge from a cave). 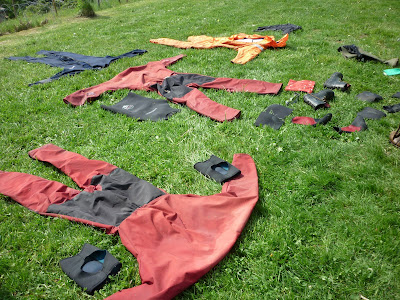 I guess it was challenging enough to be fun for everyone. If you can be sure about one thing in Spelunking (even in a makeshift cave like Barchon) it's that it will beat your expectations.

Here is a link to a movie on Barchon 2011 from some other cavers! 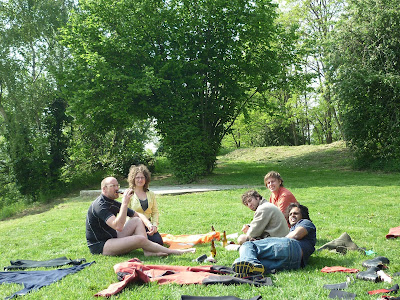