July 11th, Monday, Flemish Community holiday, one of the non-frequent days of summer in Belgium used by us as an ideal day for caving.
This time 4 of us, Bram, Hans, Jozefien and me met in the morning to look for adventurous (notice equal proportion of the gender). As it appeared at the beginning of exciting conversation we forgot a 'topo' of the cave we're heading to, Weron in Namur province. But luckily we had Jozefien with us who was there twice, so she knew the way, more or less.
According to the Avalon's website Weron is consider to be a complicated cave where you can find a bit of everything, a classical route which is consider to be relatively easy but also more sportive and difficult paths.
We entered the cave about 12.00, ready to explore, with fully equipped kitzaks and stomachs. From the beginning cave made an impression on me by being complex, so for most of the time I stayed quiet to let Jozefien and others think. 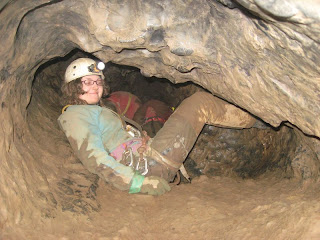 The cave appeared to look like a combination of many meanders which allows you to take and upper way of the meander or to find yourself at the bottom of it. So we took time finding our way and learning to 'equiperen'. 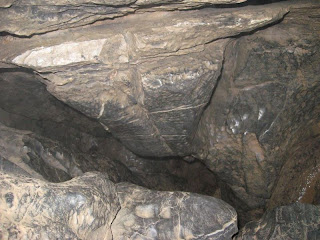 We started taking one possibility but decided to take an alternative as we may needed some rope later, Avalon's website says that you don't need any ropes for this cave, but just in case we took some, for P8 and P4, if someone doesn't feel like free climbing.
I remember us getting squeezed in the meander. 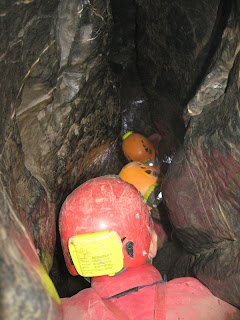 There were also parts were we needed to descend, quite deep and narrow. 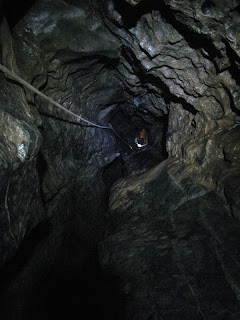 We were going forward in the cave, fighting with our own weakness: ropes, narrow passages, steep parts etc. We decided to go back after a moment when Jozefien slipped a little from the wet rock and fell down on her back. That's the scariest moment we had there with the happy ending. 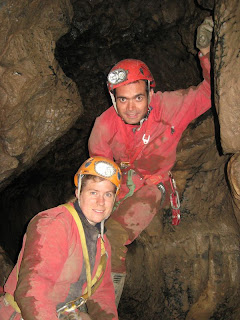 On the way back Jozefien and me got stuck few times, e.g. in a place called 'a window'- hole in the ceiling. Going down through it wasn't so bad, although I tried a jump out while being on the rope, others just wisely used oppose technique.
Getting stuck it's not the nicest feeling you can experience while being in the cave. It makes you and others anxious and tired. Thanks to Jozefien and Bram I managed to pass the window hole. Jozefien had some problems too, but boys allow her to pass smoothly. 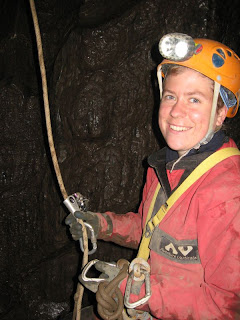 How true is the expression that time flies when you're having fun. We went out the cave, and the day was coming up to the end. It was almost 9pm, by our calculations we spent approximately 9 hours inside, and more surprisingly we did not have any food apart from one cookie and one small bottle of water. 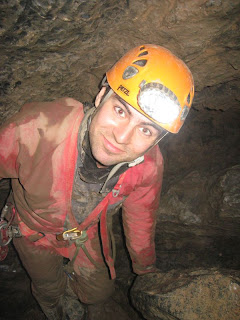 That was a real manifestation of fun in the cave, nobody felt like being hungry, thirsty or tired. We all made it sound and safe with big smiles of happiness. Our 'back-up' was glad to hear from us too.
Traditionally on our way back we stopped for a Belgian specialties: friten and beer.
Ewa