For those who are not familiar with the activity ‘Senzeille’ I can tell that it is a great opportunity to train your rope techniques on big highness. Ropes are hanged next to the wall about 30m high in the highest point, (this is also the beginning of the parcour). And then you follow the ropes, one way (in one direction).You can also join the parcour from few others points. Anyway you will be confronted with many traverse’s, paraploue’s, fractions, deviations, there is also a ladder to try, tyrolean, swing to get a rope moments, descending into the boat and many many more. In total when you sum up the ropes from the parcour it is about 1km in length, enough to practice;-). For less experienced there is also less demanding parcour where you can practice and try to learn new things without being feared of the high. 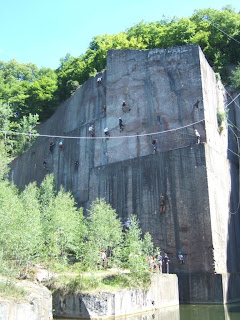 But Senzeille it is not only about rope training. It is also a great opportunity to meet and talk with other people which sharing the same passion, enjoy the local beer from last steam brewery in Europe. You could immediately noticed its international atmosphere: some French speaking clubs, many scouts, even some women from Holland which came here on purpose. But as it was easy to predict after previous years (as I was told) SPEKUL dominate also this year. We did not disappointed the local club which organized everything. I am not sure if we dominated during the speleo parcour but obviously as one big crazy family! It was given for me to be there also and participate.

Senzeille 2011 was in some way special this year, because it was combined with bachelor party of the two members of Spekul, DDR and Jasmine, the most beautiful and extremely in love with each other and adventure desire couple I saw. So the first whole day, Saturday June 28th was dedicated for them, which of course they didn’t know and didn’t not expected at all. So we met at Spekul at 1pm to discuss some final details and we were read to make our way towards Senzeille. First we got to the beautiful area of lakes, where you could try some windsurfing, water skiing and jet skiing. Our future couple and other few volunteers (Sam, Philip and Wim) decided to try some jet skiing. And the rest (too many to mention everybody :P) were sitting and watching, taking photos, support courageous ones, even also trying to be persuaded to have some swim, yes Caroline:P?. The ones that tried some jet skiing looked like they had a lot of fun and that it was really worth to try.

After that we routed to the forest to have a ‘game walk’. Fortunately it was not raining so we could enjoy our walk with all the funny tasks for the future married couple and their friends. DDR and Jasmine for example had to guess their favorite love position (also show it), the thing they most love about each other, or who they would like to have sex with within Spekulozers. As you can imagine such games always bring lots of smiles, jokes and flushes and this time it worked also. We enjoyed our walk very much.

Afterwards we headed to the Senzeille parcour place where we set our tents, registered in a big tent for the activity and instead of going to practice as we could see others did, we were ready to start the party: big barbecue, with plenty of good food and alcohol. Talking, eating, drinking, time goes by pretty fast. It got already dark, we had also a sweet delicious surprised prepared by Anja and Raf, fresh fried pancakes with ice-cream. It got late also late so some people started leaving in order to sleep and be fresh for tomorrow, some stayed longer almost until dawn. I will never forget the feeling of sitting in front of one table, listening to the conversation in 3 different languages: netherlands, french and english. I was trying to follow all of them with better or worse result.

Some of us woke up early, others at more tolerable time. We had our breakfast and we were ready to do some effort. This time my guardians were Jozefin and Bjorn, the most calm and patient people this world has ever seen. As I could experience at the very beginning Senzielle is not only about making physical effort;) But thanks to Bjorn and Jozefien I did it, the most scary thing, I went over the edge, but believe me I was more sure that I am not going to try that I that I will cause having this beautiful panorama in front of you doesn’t really help you. But thank God, oh sorry, he is not there I managed to overwhelm my shaking enormous at this moment fear. 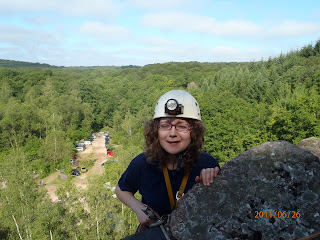 I was always in good hands, in front I had Jozefien and behind Bjorn. They were always keen to give me some advice or explanation how to deal with some possible difficulty, even if I was asking the same thing for the third time;P. Later also we saw following us Jochem and Caroline. Part of other Spekulozen were also practicing but on different parts of the ‘big wall’. 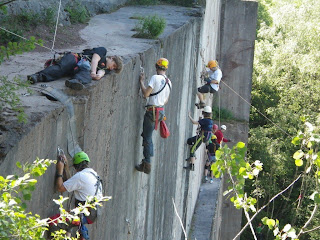 I have to say that it is pretty tiring being all the time in harness hanging on the rope, especially if you have to wait because of somebody in front of you:D than it becomes really exhausting, even painful, right Bjorn etc. For the first time I also saw the way how to rest and relax hanging, you have to lie down your body into horizontal position on the rope to let the blood flow on all levels. There was also a moment where you had to swing to be able to reach next rope, Jozefine and I put some effort to do this but smart Bjorn used the advantage of being long, like a spiderman he moved his body using some grips in the wall to get the rope. After some time following the parcour I got tired and decided to leave with trust to Bjorn helpful instructions, others continue. About in the middle of parcour there was this boat to descend with crossing the water. As I could notice it took some time for most of the people, Bjorn had to wait about 3 hours there, so I was kind of happy that I left, because it was difficult to get some help at this point, and I might have need it.

While some of us were still on ropes trying the boat, others got heated by sun and decided to decrease the temperature of their body in the pond. Some boats try-out finished being wet because of difficulties with balancing body, others wanted to refresh themselves or avoid being pushed into the water by circumnavigating spekul sharks who were very eager to help.

Although the water wasn’t very clean and clear two of us, Jasmine and DDR tried their diving skills with the equipment and instructors provided. That was the last part of their bachelor party organized by Spekul in Senzeille. 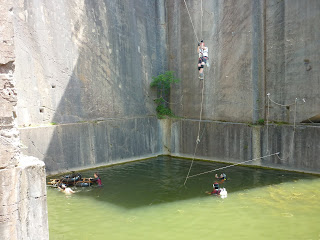 Back to the hanged individuals some cavers did the whole parcour within few hours, some just tried part of it, and others nothing at all, but still everybody was extremely happy and tired. And also the weather apart from not promising forecast spoiled us a lot in fact. About 3pm most of us started leaving…That’s how I remembered my first Senzeille, sure there are not much details in the description otherwise I need to write whole book about what happened there, how much fun I had, and about all those wonderful people I met and I had with me.

Senzeille is another solid piece of evidence why I love caving almost from the first sight. It’s just all those people, no matter what, they will make you feel like you’re a part of this big family with passion of discovering, challenging and exploring caves, body and mind.