At this moment, we’ve had our two first days in Vietnam.

Our adventure started with our flight from Brussels to Moskou, which was followed by our flight to Hanoi. After some arrangement and sightseeing we left Hanoi on the second day to visit our first region: ”Cao Bang” where we finished our preparations for our caving adventures.

Brussels 09/02/2017 12:25, we were ready, our luggage went through check in, we passed the security check and we arrived on time in the airplane. Several minutes later we finaly took off, first destination Russia. 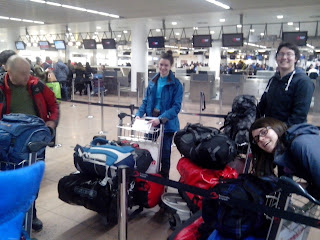 Somewhat more than 3 hours later (at about 6 o’clock local time zone) we landed in Moscow.
The flight went well except for one problem.
No gluten/milk free food was available for Heide, we fixed this by sharing of the gluten/milk free pieces of food.
In Moscow we were albeit the rows at the passport control on time to catch our next plane to Hanoi, Vietnam.


9 o’clock on Friday morning (3 o’clock in Belgium) we landed in Hanoi.

Our first visit in Vietnam was to Vigmr (Vietnamese institute for geosciences and mineral resources).
We’ll work for this institute in the coming month. Here we met the local speleologists/geologists, Chung and professor Van (head of the institute) discussed the research area. Two speleologists, Tuin and Dong will accompany us in the upcoming weeks in our exploration journey. After gathering some more material from the institute we left for the city center of Hanoi.


Hanoi is the capitol of Vietnam and the second largest city of the country (source: Wikipedia). Our first stop in the city center was our Hotel. After some arangements I left to do what I’m best in, getting lost. When I finally found my way back we all left for a meal and a nice evening walk.


The traffic in Hanoi is something of an organized chaos. To picture this I’ll give an example.
The big roads are about 3 driving lanes wide but even if marks are placed they are only considered as guidelines, all vehicles are located distributed quite homogeneously over the whole road. I think these roads are one way only but sometimes we saw some Vietnamese people driving/walking  in the opposite direction. In this city the main vehicle is the scooter.


This morning (Saturday) we left Hanoi to drive to Cao Bang region.

The Cao Bang region is located near the border of china and is known because Ho Chi Minh reentered the country to recapture it from the French. We are here because of the interesting Karstic area. The government wants to make a geological reserve. We will explore caves and draw maps to gather information on the protected areas.

The ride was without problems and the traffic was relatively calm as we were only had one very close encounter with another car. 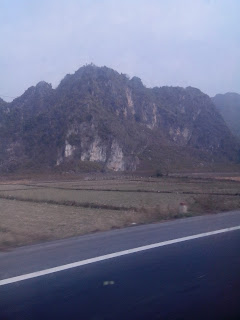 In the hotel we prepared our gear. Ropes where tied together, carabiners were put in bags and a lot of other equipment switched hands. After another good meal the plans for tomorrow were discussed.